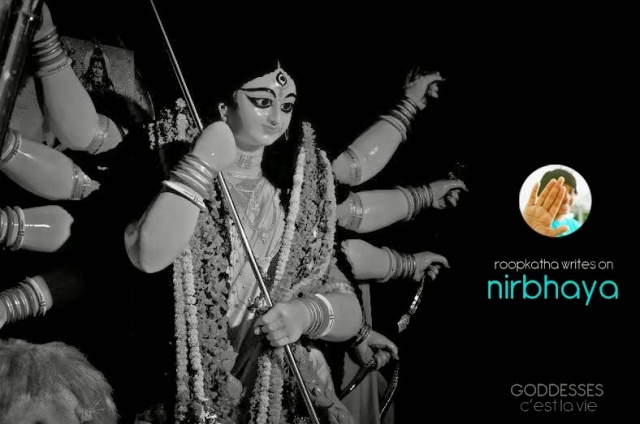 They were a quiet, religious family of five.
The father, Mr. Mukherjee, ran a chain of sari boutiques in the para. They had three daughters: Durga, the eldest, and Lakshmi and Saraswati, the twins. All three sisters were gifted, but Durga- oh, she was in a different league altogether. Tall, fair, and doe-eyed, she could spit Dostoevsky and Kafka faster than one could say literature. It didn’t help that she was studying with Science in her plus twos, an aspiring doctor: every quintessential Indian’s fantasy.  She was the classic Bengali beauty. And she was routinely the talk of the town.
“Did you hear about Durga? She won a gold medal in gymnastics! I hear she’s going for nationals this year!” “She had full marks in all her report cards. If only my son was three years older, I’d have immediately fixed her marriage with my shona mona. Such a blessing to the Mukherjee household!”
But “neglected” would not be an inappropriate word to describe the other two.
As children, they would trail behind her like a gigantic dragon puppet – her as the head, and the rest awkwardly wobbling behind her, trying to support her legacy. Lakshmi and Saraswati were quiet and withdrawn, and as time passed, their admiration for Durga turned to bitter resentment. They retracted even more into their bubbles, communicating with fluid, catlike movements and sharp glances towards each other, baulking at the social scrutiny, glaring at relatives who dared to ask them why they didn’t take up Biology or Computer Science. Instead, they walked the hallowed halls of their ‘bagan bari’, and made beautiful music together; Saraswati on the vocals, playing her veena with serene contentment, and Lakshmi, furiously scribbling lyrics down on her notepad. To outsiders, their songs were banshee wails. They were the alien sisters, mirror images with pale, gaunt features and eyes full of broken longing.
Durga, meanwhile, sparkled and shone with every passing day. She was exquisite, radiant in her beauty, and broke the hearts of several Romeos too often, too good as she was for them, and too absorbed to notice it. It was one such swashbuckler’s noose that led her to that night.

One day, she met Mahesh.
She met him online, and he captured her heart instantly. While Lakshmi and Saraswati were shooting disgusted looks at her for finding a guy with the propensity to type ‘lyk dis’, she was busy going out on dates and coming home at odd hours, sneaking out without permission, returning with bags under eyes and erratic breathing. The cigarette that now dangled between her lips stank of stale beer, and made her cough, but when asked, she’d just reply with a defensive “What? He thinks it’s sexy.” The twins snorted at her reason, Lakshmi snapping, “How independent post-modernist of you!”, but she was, after all, their secret hero, on her crumbling pedestal.  She’d leave with a “cover for me? Thanks. You’re great siblings”, and so they complied, shaking their heads at each other and wishing she would stop.
The nights grew longer, the wings of her eyeliner grew sharp enough to cut and night after night, she dragged herself into her room through the window. Watching with narrowed eyes, Saraswati started calling her Count Durgacula, and the stupid nickname stuck. Durga didn’t notice, or didn’t care, and so the days blurred by. And then one night, instead of climbing into her own room, Durga scrabbled at the window of the twins’ bedroom instead.
They thought it was just her stumbling about in a drunken stupor, and went to open the window, glancing wearily at each other. “Sick of the charades,” muttered one of them, and they threw open the shutters, to find a disheveled Durga, clothes ripped at the seams, bruises marring her pale skin, her hair a wild mess. She sat down on the bed and wrapped her arms around Saraswati. Flabbergasted, the more outspoken twin could only clear her throat awkwardly, and pat her uncertainly on her back, waiting for her older sister to speak.
“Who did this!?” Lakshmi shook her sister. “Durga! Was it him?! Did he do this?!”

But the minutes ticked by, and Durga just cried silently, shaking, then keening, and then she dissolved into gasps, grasping at her hair and her clothing like she was trying to scrub the remains of a leper off her. They took her into the shower, where she scrubbed till her skin was raw and bleeding, nails bitten to the skin, bloody. She had the look of a crazed woman, eyes darting from side to side, rocking slowly. Her screams kept the twins up all night.

Luckily the bathroom was soundproof.

The night melted into an October dawn, and suddenly the air was golden, festive. Durga emerged from her room, a changed person. Gone was the bubbly, rambunctious woman. She was a broken shell of a person. She was distracted, in terrible pain, twitchy and terrified of even the slightest sound. No one noticed. Pujo preparations were in full steam, whereas the goddess herself was missing.

On Panchami the twins mysteriously vanished, without a trace, for the entire day. People assumed they were up to their solitary shenanigans again, and nobody looked twice. Only Durga seemed withdrawn and distraught, pausing at intervals to ask where those two were. Mr. Mukherjee blamed it on unfathomable teenage idiosyncrasies, and shrugged it off.

They returned that night, identical smiles on their faces, walked up to Durga and hugged her. Durga’s smile of affection turned into one of horror as she noticed the bloodstains on their dresses.

“What have you done?!”
They shook their heads in unison, fingers on their lips, and beckoned to her. The quiet garage door creaked open. There he lay on the ground, blood-streaked, looking up at her with terror in his eyes. In Saraswati’s hand was a trishul.

The struggle was quiet, and very brief. And there was the leaf-laden, mud-filled pond right outside. The splash was lost in the sound of the drums coming from the pandal as the Goddess was welcomed, quivering in the night.

As the smell of shiuli pervaded their senses, Mr. and Mrs. Mukherjee were shocked to see their daughter, their pride and joy, a scarlet streak down the middle of her hair-parting. They sat down with her, asked her a thousand questions, but she managed to convince them to keep letting her wear it. Indignation metamorphosed into denial, and gradual resigned acceptance. The blood-red streak gleamed as she stood in front of the Goddess on the glorious Shashti morning, blazing with Goddess’s light, and people muttered, parting around her, staring at this beauty whose power seemed to scorch anybody within reach.

That October, she refused three invitations of marriage. When interrogated by familiar strangers, she would reply only with a cryptic, “Why, I’m married to my own damnation, of course.”

(Image sourced from blog article by Asmita Rajiv, the artist)

Index of Indian terms:
trishul: a three-pronged weapon, similar to a trident.
scarlet streak down the middle of her hair parting: this refers to the practice of married Hindu women wearing                  a vermilion streak in the parting of their hair.
Durga, Saraswati, Lakshmi: names of Hindu Goddeses.
Mahesh: evoking the name of the devil the Goddess defeats in Hindu mythology (Mahishasura)
shiuli: a flower traditionally associated with Durga Puja.
Durga Puja: a festival celebrating the Mother Goddess Durga.
Panchami: the fifth day of the festival.
Shashti: the sixth day of the festival.
Pandal: a place to worship the idol.
veena: an Indian instrument.
bagan bari: literally, “house with a garden”. Traditionally, a manor-house of sorts.
shona-mona: a term of endearment, translating to “my golden one”
para: neighbourhood.
sari: traditional Indian dress for women.
If you have questions about terms we missed, fire away in the comments! We’ll get back to you.