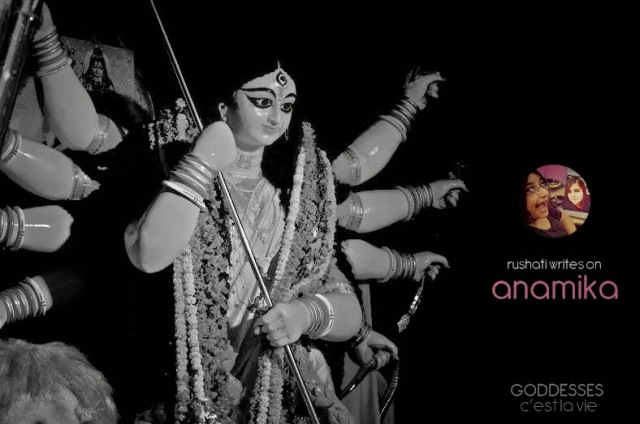 You wake up in the morning. It is warm. The sun melts in at the window. Muffled drums echo through the houses. It is shashti, the sixth day of the goddess.
You wake up sad-eyed, miserable-tongued, and chide yourself for being abyss-minded. You call on your mother, you find her excited, dressed in a sari, happy. The goddess’s blessing glows on her face. Today is going to be a good day.
You find yourself in the pandal. Clouds of incense waft around, the ululating that sets you up in “Things Fall Apart” mingles with the drums. The goddess, serene-faced, gentle-eyed, looks out over the throng, rhythmically rippling in front of her. She is calm, she is unfazed. You look at her, into her large brown eyes, and you begin to feel the knots in your stomach untie. Shiva presides, over Durga’s head. Her children crowd around her- she, a warrior, a daughter, a mother, aflame with her beauty. All is as it should be.
You are sitting on the edge of your bed, reading your best friend’s text. You are laughing. Merry stars sparkle in your eyes. The knots never were. You feel the goddess in you.
“You look beautiful,” says your neighbour, trooping down the stairs. “It’s the Mother. She purifies the air.”
Yes, you believe.
You meet with a friend having trouble with her Shiva. Shivas on earth don’t take long to turn into Asuras.
Lord, how dree, you think.
You walk down to the street, the sky’s ceramic blue dripping into the soda you sip. You ask your friend what it is like to have a Shiva. You have never been there.
“Well, it’s good,” she says, and sips. “It’s good and like having a friend, only it’s much more than a friend. I can’t really explain.”
You sip, and she goes on talking. She’s interested. You meet up with others, and she calls them to attention, asking them your point. They think. They wonder. The street parts around you to make way. You are listening, you care. One of them nudges you. What, you say. Why?
Why what?
Why do you want to know?
I…
You are quite at a loss of what to say. You say nothing, mouthing air.
“Is it,” you begin.
“Is it because you have someone in mind?”
What?
No, no. It’s not…. no.
You are in a cool hall, lit up by a chandelier, panels of bamboo running around. You look up at another goddess, more Dali-esque, more alone than your other. She has no children grouped around her, no Shiva on top. She stands, graceful and flowing, looking down at you with the same gentle eyes, same serene smile.
Where is her Shiva, you think.
And then, what if he never came?
What if she, with her battle-blood, warred with her calling, chose to leave their no-formed love behind? And what if then, on the field, she could work through her battle-scarred sorrow, and anger, and pain, only in the strength of her best friend? And what if, on the sixth day of the battle, she woke up and realised there was something off, there was something off, and that she loved her best friend?
You are standing unblinking in front of the Goddess, smiling at you, and security is yelling at you to move on.
You are blinking in the sunlight. Your phone buzzes. It’s a text. You pull out your phone, and it’s her. Funny story, supportive sighs, courage to weather through another day. The warmth seeps up from the screen and wraps you like a loving cocoon, like you didn’t know words could. It’s her.
“Lord,” you think. “I’m in love with my best friend.”
And then, “How dree.”

Index of Indian terms:
Sari: an Indian garment, worn by women.
Pandal: a temporary structure, built to house the idol of the Goddess during the festival.
Durga: the name of the Mother Goddess.
Shiva: a God, traditionally considered to be Durga’s consort.
Asura: demon.