Hurray, confetti, parade, etc, etc. I love you all (platonically and in a panda-like way) and I have missed talking to you, or at you, or, you know, just generally clacking away at a keyboard in the hope that someone out there has been listening. #Goddesses is over. It feels strange, to announce that so absolutely, after spending months developing it and making sure of every detail. But it’s done, now: packed away pine-fresh in a treasured chest in my mind, along with the lovely feedback and participation I received from real netizens in the real world. My baby, born of passion, tottered across the world, and was read by people from Australia, the States, the United Kingdom, the UAE and even Kenya. I can’t tell you how weird it felt to see these countries in the blog-analytics section- how weird and wonderful and humbling. It was a beautiful experience, filled with learning and teamwork and all that is good about the cyber age, and I genuinely could not have asked for a more instructive and exciting first project.

And then I took a little holiday to sort of recover from the postpartum depression caused by my baby growing up and leaving the nest. (That’s… that’s not postpartum depression, is it.) It was a while before I recuperate, but here I am, now, and I promise not to leave you again in the upcoming months *friendly shuffling kisses*.

Except during the actual exams I have coming up, k. I might be useless but I do want to pass.

In this one-month gap, I have seen and absorbed Misfits (WATCH THIS IMMEDIATELY I COMMAND YOU) and Game of Thrones (yes, I watched it, despite my sentimental promise not to. Oathbreaker! The hipster in me is groaning in agony), I have fallen in love with Iwan Rheon (this is not gonna end well. Why do I fall for the unreachable ones?), I have read 5 new books and I have panicked about my upcoming end semester exams. The logical course for the latter would of course be to, well, actually study, but as you may have noticed, my mind does not really process logic very well. Instead I spend all day on the internet, obsessively solving crossword puzzles and hoping the earth will swallow up the living, breathing mountain of procrastination that I am.

This is the cast of Misfits. 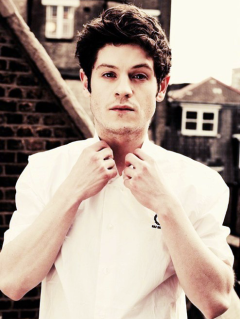 This is Iwan Rheon… 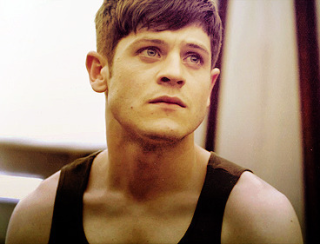 … as Simon on Misfits…

… or, as you may know him, *BLEEP* ON GAME OF THRONES (hashtag spoiler free zone).
As an unimportant yet relevant side note, my attraction towards him is especially weird because when I first saw that crazy motherf*cker, I was literally afraid of being haunted by nightmares, so strong was the impression his crazed blue eyes made on my mind. Or maybe that very feeling is responsible for it; no other character in GoT (or pretty much any series) struck so much raw fear into my heart, not even Joffrey, as irritating, petulant and kind of stupid as he is. It’s this powerful, utterly magnetic portrayal that got my attention and sucked me right back into the fangirling vortex I have been trying so hard to escape (to make up for the adulting-responsibilities I carefully avoided for the last one and a half years). There’s no going back now. I’m head over heels in obsession and my phone’s camera roll is basically a series of gifs displaying every aspect of this god-like creature, the old gods and the new bless his soul.

And how has your November been?

Autumn’s already over and done with- that was a short one, innit- and winter is not just coming but very firmly here. It’s freaking 14 degree celsius and I’m already sniffling- what even is an immune system? The months are rushing by really fast- seriously, how is it possible that it’s December already? And with the death of the year nearly within reach, the thought of turning 20 next June has been giving me sleepless nights recently. There’s this panicky sense of running out of time: how can I turn twenty so fast?! How can I be twenty so fast?! I can’t leave teenage behind so soon- I’ll have no “teen”in my age to use as an excuse for being ignorant about the basic tools of life! Watching Game of Thrones and realising that Maisie Williams, Sophie Turner and Isaac Hampstead-Wright (Arya, Sansa and Bran respectively) are all at least two years YOUNGER than me was horrifying- the little imps have their lives sorted, and me- what am I doing?! Besides, I don’t even remember who I was before my teens- it’s like I have no pre-pubescent memories whatsoever and life back then is just a happy blur of Utopian situations. Being a teenager and all the ensuing protection that goes with it, is all that I’ve really known of life. What happens when I lose that cover and stand naked in the rain trying to pick myself back up?!

Yes, yes, I worry too much. Shush. You’ll feel this way too when you turn 40, just you wait.

Although God knows I’m already 60, at least if one judges by how stressed out I get over minor things like utterly ordinary existential apocalypses. Here, have a happy panda or two to cheer things up! 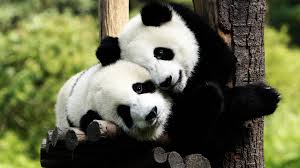 (Now all I need is a fellow human to cuddle with me like this. Is that too much to ask for jfc !@$$U^@@?!)
(I’m sorry, I’ll leave my tragic aka non-existent dating profile out of this post)
I sometimes wish life could be the way it seems to be on Tumblr. I’ve been Tumbling (is that the word, children?) a lot lately (here, incidentally), and the artsy photographs I find there create this strange nostalgia in my gullible heart for things I have never even experienced. For example, by the pictures on that infernal website, one would think that there is no season more ethereally lovely than autumn. Even Keats could not capture the grandeur of these romantic vistas that spread themselves across my dash like picturisations of Lana del Ray songs. Just look at these. Look at those glorious shades and nostalgic notions draping themselves like noxious lies over your bedazzled peepers. But then I learnt the hard way the hard truths of life: reality defeats expectations (*cue overdone overused meme that if anyone uses one more time the universe will implode*), and life as presented on Tumblr is a stylisation of the reality I live in. My autumn wasn’t glorious and beautiful and orange- it was violent colds and exams and trying to stay healthy and failing spectacularly. I feel strangely cheated. The dark, misty, fairy-light-lit worlds of Tumblr seem so calm, so removed from the random chaos spewing its design over the universe, and their dissipation into coarse reality seems a travesty I don’t want to withstand-and yet, I am aware it is inevitable, and truth, and the way things are. This consciousness feels diseased, for some reason. It’s like the rose-tinted glasses are suddenly gone. Is this what growing up feels like?

OH GOD NO STOP I DON’T WANT IT TO HAPPEN.

But since there is no point in trying to stop the relentless onward march of time and destiny (if there is such a thing, which would be order masquerading as chaos, which is a totally bitchy thing to do), I suppose I just have to make my peace with it. So here I am, back here in our little world, to scream into the cyber void across the digital ocean to the shore on which you stand, and for one glorious half-hour every week, we will forget our worries and indulge in the nonsense ramblings I like to call a blog post. I sometimes think of my blog as a kind of Narnia: an escape into a dimension where people are not forever killing each other, where hope is alive and salvation palpable and the air does’t tremble with fear. Here we can all be dwarves and tree nymphs and beavers together, and not give a flying crap, for a few minutes in our day, about the horrors of this crazy, confusing, complex world we must dwell in.

Until next time. Chin-Chin.