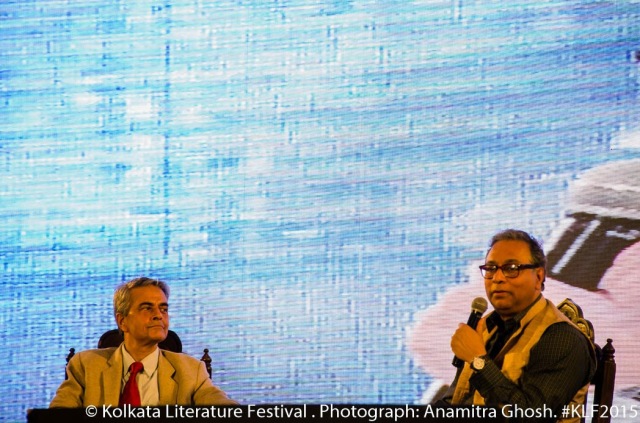 A whirlwind second session ends here at the Kolkata Literature Fest 2015. Speakers Upamanyu Chatterjee and Jawhar Sircar engage in a lively and often humourous debate on “Twin Sharing: Dilemmas of a Creative Bureaucrat”, focusing on the challenges of balancing service with creative freedom. Jawhar Sircar is passionate about his condemnation of Indian bureaucracy as a system that squeezes creativity and the ability of independent thinking and expression, while Mr Chatterjee is more reserved, due to, according Mr Sircar, his continued link with the Indian Administrative Services. However, both acknowledge the difficulties of trying to express oneself in the middle of a system Mr Sircar describes as “feudal”: where bowing and scraping is the order of the day and the “servant” part of civil service is taken a bit too seriously!

The discussion is peppered with humour; Mr Chatterjee drily comments on the motivation for youth in his time to enter the Services: a large dowry; Mr Sircar mentions he almost wanted annul and then re-instate his marriage after hearing the absurdly high dowry rates on the market for civil servants. Why do young Bengalis not go into the civil services? Because, of course, Bengalis don’t believe in dowry.

There are pertinent comments on Indian culture, in whose veins the “rot” of a feudal system runs from Mughal times, as mentioned by Mr Sircar. At one point, the smoke machines at the back of the stage randomly and dramatically turn on: clearly someone was trying to create a smokescreen to hide the ugly truths being exposed by Mr Sircar. It wouldn’t be the first time; he mentions the occasion on which he was “thrown out” of service for doing just that.

An immensely enjoyable session ends with the anticipation of a second, equally enjoyable one about to begin in a few minutes.

PS: I’d like to report Mr Chatterjee’s startling resemblance to T. S. Eliot that immediately endeared him to me and Mr Sircar’s delightful sense of humour that did likewise for him. See. Good, honest and faithful reporting right there.