I have decided to drop poetry, down-to-earth prose, the weaving of a story connecting all the images in my head into the trashcan residing in the back of my brain. It’s slightly brimming with my hopes and goals, but I’ll manage. This has been a journey of sorts, where I have managed to parallel-park myself at a highly overwhelming spot – sandwiched between the sea of Pablo Honeyand trying to navigate round The Bends(guess how much time it took to frame this) – hence, somehow, I find it apt that I thread those images into a travelogue…of sorts. It’s more of a monologue, actually.

Well… it’s not that quiet in my head like I thought. There are too many people.
Like a lot of people who have grown out their teenage locks with angsty alternative rock, sixteen-year-old me stumbled upon Radiohead in the guise of an experiment (now I know a lot of people who have spent their pimply early years with the band, but to each his own maturity). Let’s say – to be part of someone else’s constellation. To understand the workings of somebody’s little corner of the universe, and be engulfed in that which made up their world: basically, a music recommendation that started with three songs and an introductory line, “They make me feel like I’m in a whole other world.” Typical pushover things.
Clichéd words aside, and throwing even more painfully-clichéd memories into the now-brimming trashcan, OK Computer was my first headlong dive (hah, but the mystery of the highly ambiguous title is not yet solved). To that teen struggling with an inferiority complex – not so much a complex as an alter ego that served as friend, confider, imaginary comrade-in-arms – music was not only a portal to another brighter world, but a tool to live the life that I had etched out in the walls of my heart. I was steeped in R&B, soul – all commercial, never make the mistake of over-estimating me. A smarter, dressier, lighter version pranced on streets I’d never known, away from the space of now. 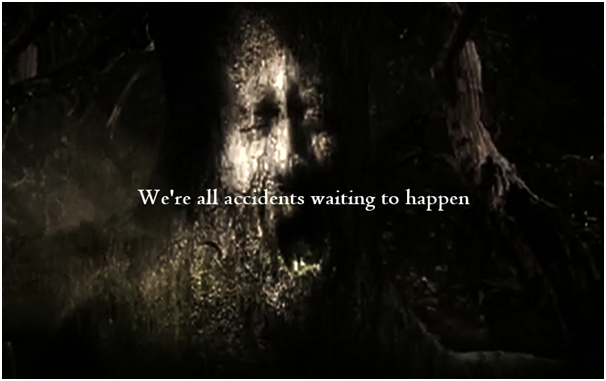 “Just ‘cause you feel it, doesn’t mean it’s there.” Thank you for all the life lessons.
An interesting anecdote that serves as the beginning to what pushed me off the edge and sent me to drown, and subsequently, earthed by this force would be the discussion of a term paper topic that I had to hurriedly come up with if I wanted to pass in that particular course. I chose Radiohead solely because of the fact that it was the only non-laughable thing that I knew of and which had a slightly lesser chance of not being shrugged off by the professor-in-charge. After having made the embarrassing gaffe of calling OK Computer recent work, I had to take two literal, horrified steps backwards when Professor Radiohead nonchalantly corrected me, and ask, “Whoa. You know about Radiohead?” “What did you think, just because my hair is grey means I won’t know about them? Radiohead is one of the most progressive bands out there.”
Well okay then.
That academic recommendation and consequent approval of my topic sent me on an expedition that has become a pilgrimage. Enter soul-enervating, mind-numbing, angry guitar strains, and music I couldn’t differentiate from the various workings inside my mind that it put into motion. Imagine your body working alongside a music track – similar to a workout – and feeling displaced from your body at the same time. Lying down and feeling the pit of your stomach descending into an abyss that exists way below the ground that you are used to. I wasn’t been pushed into hell – somehow, this music never let me down; unlike the others, this did not let me believe in a different world with a self that was me, but definitely wasn’t the same that I had entirely ceased to be, where everything was better. Perhaps grounding me in reality, and not drowning, was the purpose of listening to this. And perhaps constant soul searching was what someone like me needed.
You see, I have always been an amalgam – never a proper compounded substance made of flesh, blood, hair and bone, never a balanced mind that had experiences, thoughts, emotions and recollections filed neatly and colour-coded. Being a motley combination of things that have flashed before my eyes, sounds that have travelled states to still resonate in my mind, smells, colours, fears – memories, people, trails – I have often feared whether I had a constant personality at all. Something permanent, like they say, that you could carry beyond this life. Everyone has a life, a soul, and experiences, no matter how devoid of the senses, and though I may have a soul, could I have a personality that stayed constant, too? Am I living, or am I just killing time?

Background image courtesy: www.deadairspace.com Be sure to visit all the links.
Radiohead has been a constant that fluctuated only in the intensity of its presence (I refer to the band as “it”, because the need has transcended beyond mere personal attraction and appeal). Why I talk of it when I had been talking about personality is because of the way it has not just made me but has forced me to stay in this world, instead of throwing myself into a makeshift reality that would have been just transparent idealism, because thatwould have been pathetic – and not this, this quagmire of doubt that I, and the rest of the world, live in. Maybe doubt is necessary, maybe the need to know more about the outside and the inside needs to exist for us to still live. Maybe doubt is the reason why I still exist – as Lovecraft puts it, the strongest and oldest fear of all is the fear of the unknown, and as long as uncertainty and fear exists, we still remain alive.
I guess you could say Radiohead gave me a reason to be. Just, stay, and work on the existence part. As someone who is someone’s best critic, I have become proud of the fact that I am mature enough to understand and be able to enjoy Radiohead, and linger on each song and album, and performance, which is the reason why I’m yet to finish listening to two whole albums. Starting from the middle (OK Computer) and then alternating forwards (In Rainbows) and backwards (The Bends) does that to you. Yet I write on something that has influenced me to do unthinkable things like grow up and let go. There are some things in life that you love in a way that it unsettles your whole being, mostly because it is so utterly dissimilar to the person you are to the world and to yourself. I do not know where Radiohead fits into me, honestly, and probably will never know, except that it makes me more like the person I have wanted to be. Just like how the idea of my personality is vague, this image of a future self remains just as hazy. I do not know why I need this influence, even though I may have unknowingly revealed reasons for doing so. A situation of total submission: OK Radiohead. (cue: Wise understanding noises.)
And sometimes, the thing that allowed you to be part of someone else’s universe, shows you the existence of many more inside your own self. This is what Radiohead has been to me: something that allows me to exist in the reality of others but simultaneously sustain the worlds I have built within myself.
Welcome to the Existential Crisis. I’ll be your tour guide.
Nude (In Rainbows)
All I Need (In Rainbows)
Weird Fishes (In Rainbows)
Videotape(In Rainbows)
How To Disappear Completely (Kid A)
Motion Picture Soundtrack (Kid A)
No Surprises (OK Computer)
Let Down (OK Computer) + (MTV Unplugged Live)
Paranoid Android (OK Computer)
Planet Telex (The Bends)
High and Dry (The Bends)
Fake Plastic Trees (The Bends) + (MTV Unplugged Live)
Bullet Proof (I Wish I Was) (The Bends)
Sulk (The Bends)
Disclaimer: The above songs recommended for dealing with the occasional/daily existential crisis. A whole world awaits you out there.

21st century romance.
x-x
Hope you enjoyed the first post for Melodies! More to come soon. See you ’round on Sunday for the next one.
Meanwhile, here’s who wrote this wonderful post for you: 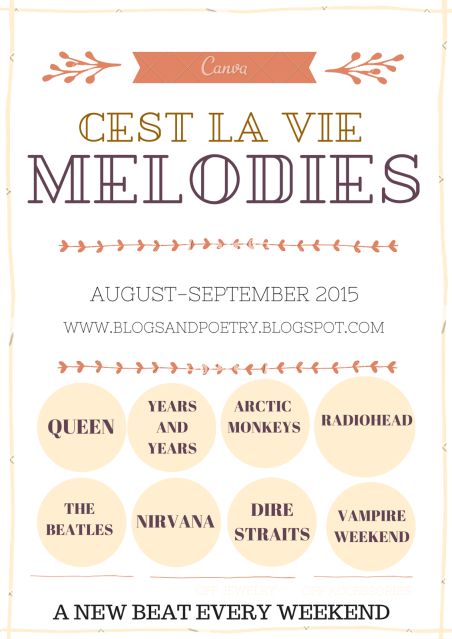