It’s 11:22 pm on the 19th of June: an hour at which, under my new mentally-healthy regime of sleeping and waking, I would usually be preparing for bed. Instead, I am clattering away at this keyboard with a heart truly overflowing with joy: my dad is a blogger now!

There are very, very many reasons this is important.

My dad and I have shared a long journey together. It’s not been easy; I clearly recall, in one of my more teenage-angsty moments, screaming I hated him and wanted to leave the house immediately with no intention of coming back. (That did not happen.) But far more important are the times he’s been, for lack of a less cliched term that truly expresses my feelings, the pillar I have clung to in stormy times and worse.

One of my earliest memories of my dad is that of bidding him goodbye.

He’d leave Kolkata for work often when I was young, going on his mysterious trips around Eastern India, disappearing for about a fortnight at a time every month. My mom and I had a game: every night, we’d call him from one of the telephone booths that supported an out-of-state connection, and I’d put on a grown up voice and say, “Baba. Phone korley taholey!” It used to be one of those completely meaningless, innocent jokes of childhood that seem much less funny now; yet every time I’d say that, my parents would be in splits. Even now it manages to draw out a smile: one of those smiles that conceal a small tragedy of times long gone.

When fourth grade rolled around, I knew my dad was going to be with me far more often than ever before.

We’d moved to Mumbai, the city of dreams and disillusionment. I was nine, and for the first time, I saw my dad struggle against the myriad forces that ply that strange city. Maybe it was because he was so much closer than he had been; maybe it was because I was growing up. Either way, day after day we, as a family, struggled against troubles outside our control, not the least of which was an identity crisis that afflicted all three of us together. It threatened to split us apart, not only from each other but within ourselves, and for three years, we, my mom, my dad, and I, lived in a sort of schizophrenic reality that shaped us in new, unknown ways.

And yet we stuck together.

Looking back, I honestly don’t really know what kept us together. Was it my presence as the child handling a mountain, a poor imitation of a child-god, or was it my mother’s grim determination that I should be okay and my father should continue to strive?

Or was it my father, and his fortitude, and his calmness, and his wisdom, and the thousand other qualities that help him fight against all odds to this day?

The odds never got lesser. The world is not a wish-granting factory, to quote another wise man, and it never did grant his wishes for himself, or my wishes for him, or my mother’s silent prayers for his sake. We moved to the south: my father loved Bangalore. He loved its soft rain, the smell of the dosas and coffee, the swishing trees and wide-open roads. He loved its taste of closure, of final destination: he loved feeling like he’d finally brought it home.

A long time ago, when I was perhaps ten or eleven, my father had told me his worst nightmare.

He did the one thing he’d done all his life: he looked to me and my mother, and found his answer in our faces. He brought us home.

My dad left behind everything, everything he had, everything he wanted to build, for me: because I wanted to study English the way I knew how. He left everything for my mom, who knew how to be truly happy only in this city that gave her both her roots and wings.

For four years we’ve been here now. The tempest has not ceased. The insidious calm still prevails in its eye. We are tossed about, he is tossed about, endlessly: and we do not know when it will stop.

In the last scene of Vittorio De Sica’s The Bicycle Thief, the boy comes forward and holds his father’s hand.Together, they walk away into the crowd.

What does that gesture mean? Comfort? Acknowledgement? Reassurance? The meeting of comrades as equals? I do not know. All I know is this: for the first time in my almost 21 years of existence, today, on the 19th of June 2016, I had the occasion to teach my father something I know.

My father’s never taught me anything.

And today, on this Father’s Day of 2016, my father and I have taken a small step together: today, I taught my father how to blog.

They told us that Kolkata could never bring us anything. It could never bring us anything except nothingness. Those nameless, faceless beings, which resemble the beings in our mirrors the most strongly, to them I say: look, in this city that you call decaying, in this land you call dead, my father has learnt how to blossom. My father has learnt how to grow.

Happy Father’s Day, dad. Thank you for giving me the greatest gift I will ever get, today.

Find my dad’s blog at www.bijanmukherjee.wordpress.com

It is for all you busy business-people, interested in pharmaceutical marketing and sales. I don’t know what that means but I will occasionally help out with Angrezi and such. My dad is brilliant, he is dedicated and he strives for nothing less that excellence in what he does. I hope his blog is of help to you.

Also, WHY ARE YOU SO CAMERA-SHY, FATHER. I COULD NOT FIND A SINGLE DECENT PICTURE OF THE TWO OF US TOGETHER AFTER AN HOUR OF COMBING THROUGH OUR RECENT PHOTOS! Hmph. 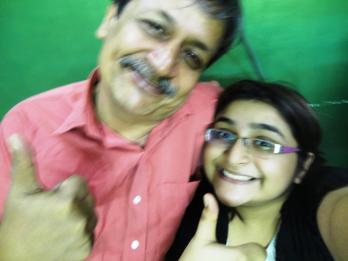