Travelling on public transport is always an adventure. This is especially true for Kolkata and its colourful fleet of buses. The sheer number and variety of transport corporations and routes are mind boggling. Then there are the people. Here are 7 kinds of people everyone meets on these buses:

Conductor Kakus are the jack-of-all-trades of public buses. They yell the names of stoppages, allow you to get down exactly where you need to (even if it isn’t a stoppage), break up fights between passengers and even give you khuchro if you ask nicely. On some days they are grumpy and communicate in grunts, but on most days their brisk efficiency isn’t out of place. They are my favourite kinds of people. 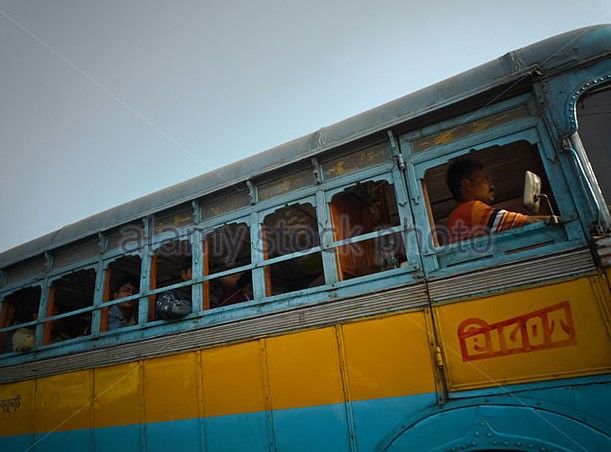 The Bus Driver Dada should have had a career in Formula 1, but regrettably had to give it up in favour of helping us reach our destinations. He and the conductor work in flawless partnership, communicating through non-verbal signals. He can take the bus from 1-mile-an-hour crawl to 1-mile-a-second gallop in record time. Sometimes (all the time) he faces the brunt of passengers protesting both extremes. But he’s also the one who watches out for the “Ladies” and “Bachhas”. Occasionally, he may even remember your stop when the conductor himself has forgotten.

Every bus has at least one well-meaning middle-aged aunty who elbows you, pushes her tummy against your back, occasionally clutches your arm to stop herself from falling and generally has zero concept of personal space. On early morning bus rides, it is easy to get annoyed with her. But these Aunties are also very chatty and helpful. They’re the people to ask for help if you’re confused or nervous. They will help you find the right stop after telling you her life story and then making you recite yours. You might even get some free advice to boot.

Bus Uncles tend to be have the same nature as Bus Aunties. They are absolute gentlemen, polite and garrulous, with white hair and strong voices. They help you to find a seat, offer to carry your bag and make sure you get down safely at the right place. Unlike Bus Aunties, they have no problem knowing exactly how much personal space you’re comfortable with– and they never breach it. They start spirited conversations about politics that the whole bus, including the conductor, joins in. There is a lot of good-natured yelling and debate. I once saw a gentleman buy the conductor some Kalkatta cutting chai right after one of these.

#5 Creepy Sexual Predator who Stands too Close to You

All of my ladies will testify to his presence. Whether it’s a hand brushing one’s back, butt or boobs, or standing too close when in the aisle seat, his slithering being is unmistakeable. These are the kind of people you scream at and who make public transport such a pain. Public transport should be safe for women, but apparently reclaiming public space to fill and exist in, just as men do, is an invitation to be treated as a sexual object. Patriarchy, screw you.

Ah, the bane of public transport. These people, usually men (hence the ‘man’), consider every space their private property and fill it accordingly. The concept of ‘putting your legs together’ has apparently never been made known to them. They are even more irritating in auto-rickshaws, but especially so in crowded buses with no space to stand. “Dada, ektu chepey boshun na!“ usually works though.

#7 Conductors / Drivers of Other Buses

These are the guys who communicate across roads and lanes with people in your bus. There are drivers of different routes who stop beside your bus and chat across lanes with your driver. (Even though technically, they should all be in the Bus Lane on the left of the road.) There are drivers of the same route who smirk at your driver from the opposite side of the road. Then there are the conductors who casually out of the door to talk to his friends in other buses. It’s a strange case of transport gymnastics. It’s fascinating to watch.

Some of my favourite memories of Kolkata have been created on its buses.

My first taste of independence came when I started travelling alone on them. I have found companionship on them by talking to fellow passengers of all ages, from all walks of life. I have seen unparalleled acts of kindness, when conductors allow people to travel with dignity despite not being able to pay the full amount. I have seen drivers and passengers sharing a quiet cup of tea on a deserted summer afternoon.

Recently, there has been a spate of horrifying road accidents in Kolkata.

It’s hard to find good things to say/ remember in such a time. But that’s why I put up this post. It’s a reminder that, along with all the horrible things that happen, good experiences also take place.

Drive responsibly, guys. Stay safe. Pay attention to traffic regulations. And keep each other safe. Help each other in case of accidents. Don’t be a bystander.

I’m taking part in Blogmas! For the uninitiated, Blogmas is that wonderful time of the year when a blogger writes a post every day of December, leading up to Christmas. This is day 6.

What is your favourite Kolkata Bus Experience? Tell me in the comments!

SPIKTINOT IS NOW OPEN FOR SUBMISSIONS. If you liked this, do share it with your friends.

See you on Spiktinot tomorrow!