Movie: Pari – Not a Fairytale

Story: Young loner Arnab is on his way home in heavy rains with his parents after agreeing to a match arranged by them, when their car hits a passerby. On visiting the victim’s home, they find a young woman whose odd behaviour hints at a sinister mystery lurking under the surface of our world. 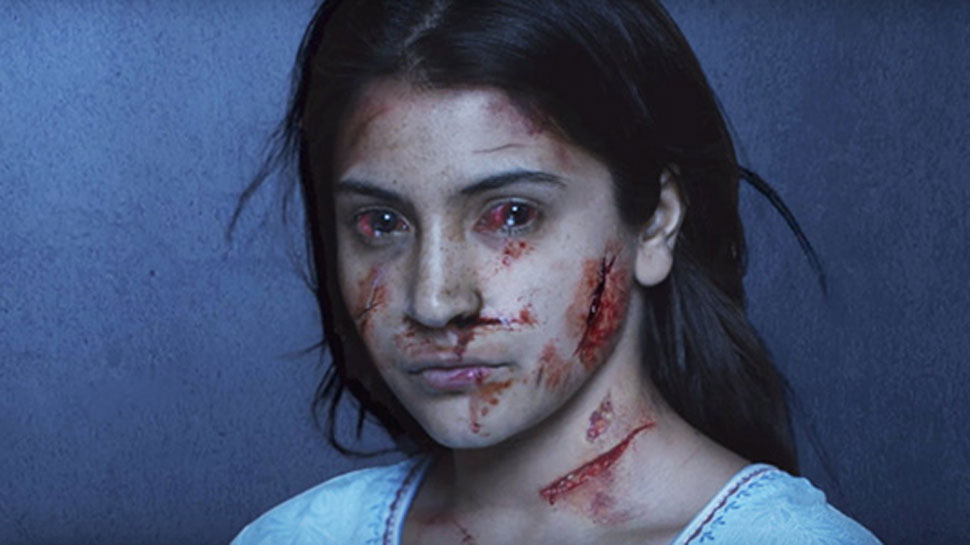 TL;DR: Hindi horror films have come of age with Pari.

What makes a good horror film? The ‘atmospherics’, which is a sweeping word for summing up many different components of the film: the background score, the mise en scène, the colour palette, the cinematography, the shot structure (jump scares included), the pace of the narrative? The characters, and how invested we are in their well-being? Or the story, which can both shock and awe and make us see the world in an entirely new light?

The good news is that you won’t have to choose. Pari has them all.

The first and in many ways the best thing about Pari is the fact that it looks like a horror film. The production is slick and smooth, with nuanced cinematography and an oppressive, arresting visual palette. I watched the film with my friend, who, for the first ten minutes, complained about the dominance of blues, greens, whites and greys in the scenes- ‘Why is it so gloomy?’- but I think that was the point. I loved the contrasts between the interior locations in the film, especially that of Arnab’s childhood home and that of his flat, and I loved some of the symbolic elements in the movie, especially the use of cartoons to portray subtext.

Stealing the scenes is Anushka Sharma’s Rukhsana. I’m trying not to give away too much here but, as my prophetic friend kept saying, “I came here expecting to get scared by her, not invested in her!” Rukhsana is complex and powerful: she can be angry, jealous, violent, childlike, vulnerable, traumatised, mischievous, loving, womanlike, badass, and, most importantly, NOT VIRGINAL. Anushka’s masterful building of her character happens slowly but surely, and the fact that our sympathies remained with her to the end is a testament to what a good job she did.

Parambrata’s young Arnab is like most men: frightened and running away from responsibility. (I joke.) He is very much not a knight in shining armour but the fact that we (the entire theatre, angrily and exasperatedly) kept pushing him to do better meant we found him redeemable.  Ritabhari’s Piyali brings the movie together and anyone who minimises her role is sending up a red flag about themselves- that they have not understood the subtext of either this movie or of any situation involving sexual consent, the abdication of responsibility, or the way in which women are vilified for all of these. Side not: I hope she dumped her fiance’s ass after the events of the movie.

The best part is that in this movie the women save each other. As my Cassandra-like friend said, the woman is the one who is able to look past the monster, not the men.

Director Prosit Roy and co-writer Abhishek Banerjee has turned the classic trope of horror on its head, much like Get Out (albeit not quite as revolutionary).  A lot of the horror stems from the malevolence of the human hunters of Rukhsana, whose leader possesses the composed, fanatical singlemindedness of Christoph Waltz’s Hans Landa from Inglourious Basterds. You have got to respond to the idea of a group of men determinedly hunting one woman, especially when it manifests visually onscreen.

Ultimately, this is how I read the story: as a metaphor for the dynamics of consent.

The film portrays rape as a literal demonic manifestation. The contrast lay in hope, born of consensual love. It’s impossible to ignore the many ways in which the film shows a woman being punished for her own violation, physically and psychologically. And it’s a woman who ultimately sets this right in the end. So it’s also a story of sisterhood, which takes it a step forward from the portrayal of simply one woman as extraordinary.

Incredibly, so many reviews including the ones from Hindustan Times, Scroll and, disappointingly, even The Hindu doesn’t even mention rape, although that is literally the basis of the film, positing it as mostly a run-of-the-mill good versus evil trope instead. The first two both mention that the scares drop away after the first half an hour, although the rape is shown (quite graphically, in a vivid red-and-yellow sequence that strongly contrasted with the general tone of the movie and was easily the most frightening sequence for me) in the second half- apparently, it is not horrifying enough.

I’m going to go ahead and say it: Bollywood (or at least films made in Hindi) needed a movie like Pari. With Pari, Hindi films have gone beyond just the scare factor in horror films. It’s moved into films that have a story to tell- if you’re listening.

And if you guys want to find out more about the film, maybe check out this interview of Prosit and Parambrata that I had the opportunity to participate in last week? Let me know what you thought!